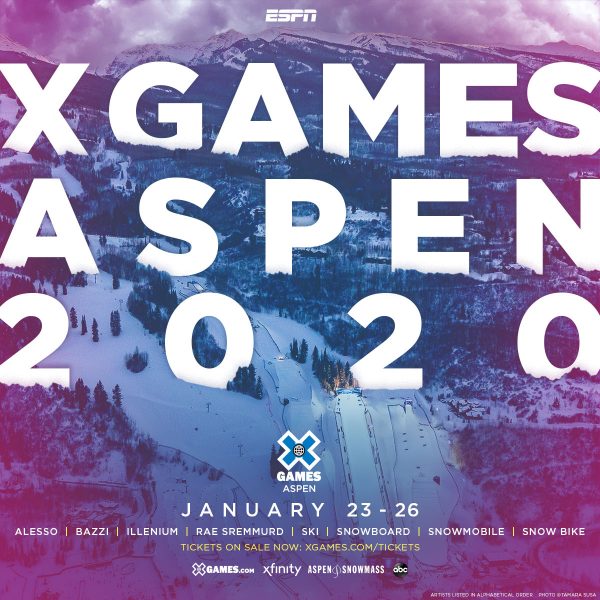 This article was originally published in the Aspen Times as part of AVSC's Clubhouse Chronicles column.

It’s that time of year again where flocks of energy drink-drinking, adrenaline-seeking fans migrate to Buttermilk for ESPN’s Winter X Games. Practice kicked off early in the week and the medals started getting handed out Thursday.

X Games has been in Aspen for almost 20 years and it has allowed us fans, young and old, the chance to be up close and personal with our biggest idols. Personalities that usually only grace the screens of our smartphones, computers and television are now throwing down in front of our eyes and in our backyard.

For the athletes, X Games is one of the most coveted events to be invited to and one of the most treasured medals to acquire. Although the Olympics are usually the cream of the crop for most sports, being invited to X Games has always been the pinnacle for most slopestyle, halfpipe and big air skiers and snowboarders.

History is written year after year and the level of riding gets pushed higher and higher for all extreme sports lucky enough to catch ESPN’s eye. The amount of incredible human feats recorded over the years across both summer and winter X Games have been unbelievable. Tony Hawk landed the first 900 on a skateboard in 1999 at X Games. Travis Pastrana landed the first double backflip on a dirt bike in 2006 at X Games. Peter Olenick did the first double flip in the halfpipe in competition in 2007 at X Games. The list goes on and on. Triple flips are now the norm when back in the day you were cool if you could do a 720.

I still remember my first X Games experience in 2002. I was almost 13 and on the AVSC freestyle team. I was as excited as ever to be roaming around X Games without parents, visiting all the swag tents searching for free bandanas and pizza rolls and hoping to catch a glimpse of my favorite professional skiers.

I wanted an autograph so badly from anyone that would give me the time of day. My weekend was capped off when I got the bib from Skogan Sprang, someone I watched growing up in most of my ski movies. He got last place that day, but I couldn’t have cared less. Bib in hand plus a pocket full of free Chapstick and a noise maker and I was over the moon, already awaiting next year. Now when I see all the kids in AVSC jackets in the crowds asking for a high five or an autograph, I can’t help but feel a little nostalgic.
We have been lucky enough to see plenty of local talent in both X Games ski slopestyle and halfpipe throughout the years. I grew up watching our local legends Steele Spence, Peter Olenick and Matt Walker. Torin Yater-Wallace showed up and won silver in his first ever X Games in 2011 and added multiple more. Alex Ferreira won gold last year.

Now young guns and AVSC alumni like Cassidy Jarrell are getting their first shot at skiing under the lights and showing current AVSC athlete Hunter Maytin the ropes as he gets the opportunity to forerun the halfpipe Sunday before the competition. Every athlete named above is an alumni or former coach to the Aspen Valley Ski Club. We are extremely privileged to have this event to not only inspire the next generation but also showcase that Aspen is passionate about winter and that we celebrate all the ways that one can have fun in the snow.