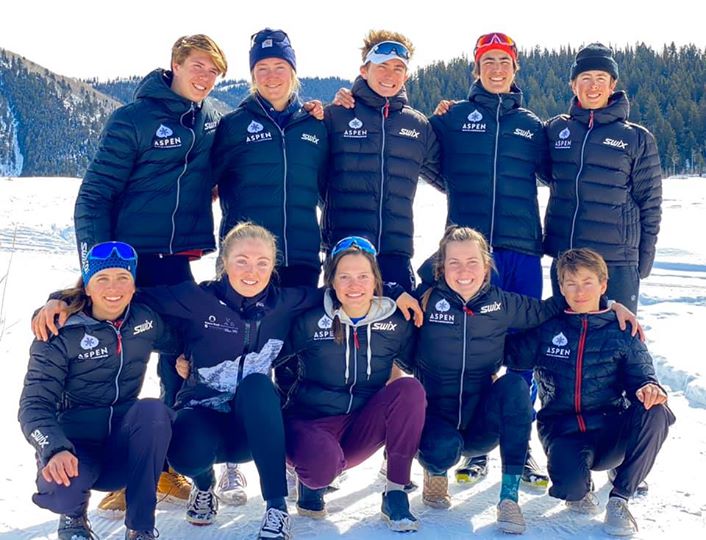 This article was originally published in the Aspen Times.

After rapidly climbing the U18 ranks in a breakthrough season last winter, Kate Oldham finally took a small stumble at U.S. senior nationals in January. The cross-country skier didn’t have a bad showing by any means, but she didn’t finish high enough to get invited back to any of the European competitions like she wanted.

A small setback, yes, but it also was an important lesson to take in for the 17-year-old Aspen Valley Ski and Snowboard Club athlete.

“It was definitely disappointing, but it was a good reminder for me that progress isn’t linear and you just have to keep working and you’ll have another breakthrough,” Oldham said. “It was a good lesson, because I hadn’t really learned that one yet. I had sort of just been getting better and better and better and hadn’t had a missed goal.”

A senior at Colorado Rocky Mountain School in Carbondale, Oldham made up for it by finishing the season strong at junior nationals earlier this month. The biggest junior competition of the season, the event was hosted by Auburn Ski Club, just down the road from Truckee, California.

The highlight of her two races was a third-place finish in the March 9 classic individual start, with second-place finisher Emma Reeder, of Vail, besting her by only a tenth of a second. Stratton Mountain School’s Nina Seemann won the race.

“We’ve been leapfrogging each other all season and have just been super close and it’s fun to have somebody always there to push me like that,” Oldham said of Reeder. “I was really happy to be able to show up fit. Since I didn’t make some of my other goals earlier this season, it actually gave me a chance to get a couple more big blocks of training in and that was helpful for being as prepared as I could be going into that race.”

Oldham also made the B finals of the March 11 freestyle sprint, a race also won by Seemann. By finishing top 10, Oldham earned All-American recognition in both her races.

“To get medals in both races, I think Kate was absolutely floored,” said August Teague, AVSC’s Nordic program director. “That third place was special. It was one going into we knew we had a chance of doing well in. I think she was disappointed we didn’t get to try the skate distance, because I think she had her sights set on that win.”

LITTLE BREAKTHROUGHS
Junior nationals had been scheduled to hold a skate mass start on March 13 and a classic relay the following day, but both those events were ultimately canceled because of the COVID-19 pandemic that was just reaching the Truckee area.

Still, it was a strong showing for the Aspen club as a whole, which sent a program best 11 athletes to junior nationals. Their previous record of attendees had been eight, which came only last winter. Aspen’s Everett Olson had arguably the next best result behind Oldham, taking 12th in the men’s U20 classic, the highest-level race at junior nationals. Teague said Olson would have been a strong All-American contender in the skate race.

The most surprising finish, according to Teague, was Roaring Fork freshman Corbin Carpenter, who finished 17th in the U16 race. He was one of the many “little breakthroughs” the club saw while in California.

“We are slowly building the culture around hard work and year-round commitment to a sport,” Teague said. “I was lucky in that I had some really good support and staff that have been in place now for a couple of years that have helped build that culture. Then I think the kids themselves went out and actually did the hard work.”

IN SIMI’S FOOTSTEPS
With the coronavirus bringing an early end to the ski season, athletes like Oldham can now look ahead to those next steps. For the CRMS senior, it will be moving on to compete at Middlebury College in Vermont, the same school that Aspen Olympian and World Cup cross-country skier Simi Hamilton also attended.

Being a private school, Middlebury asked for an early commitment from Oldham. At the time, she didn’t have many other offers — although they would come by the handful as the season progressed — but she felt comfortable with the coaches and current Middlebury athletes to make it official and follow in Hamilton’s footsteps.

“I had a choice to either wait and try to figure something out after or commit to Middlebury. It wasn’t actually too hard of a decision because I was really excited about Middlebury and I loved it when I visited,” Oldham said. “While it felt a little bit premature, it in the end wasn’t really a hard decision.”