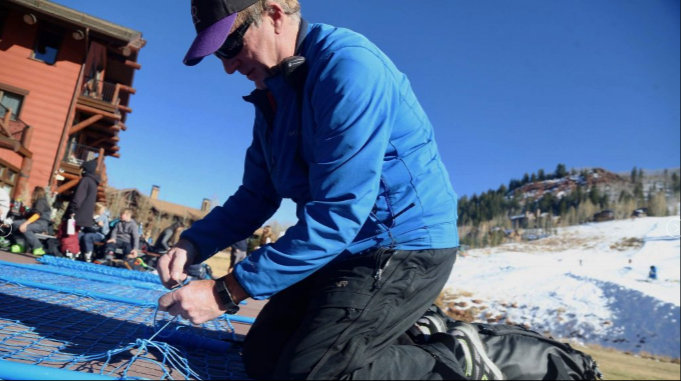 This article and photo were originally published by Austin Colbert in the Aspen Times.

Before the Stapleton Training Center opened at Aspen Highlands in 2014,
young ski racers from the Aspen Valley Ski and Snowboard Club would have to spend a lot of time on the road in order to find early-season training.

“We had snowmaking on the lower half, but that doesn’t do any good if you can’t ski to it,” AVSC race director Pat Callahan recalled of Highlands. “That’s the biggest thing, is we would be at Copper Mountain or Loveland or A-Basin until definitely December. In November, there was no training here.”

But when a group led by Aspen skiing icon Dave Stapleton came together to make the AVSC-run training venue a reality, new doors were opened for skiers everywhere. Snowmaking was added to the upper portion of the current training area, which is located predominantly on the Golden Horn run, a game changer for the club athletes.

And this season has been especially good, with colder-than-normal temperatures allowing for the earliest start in its six years of existence. The Stapleton Training Center officially opened for business Saturday, which is roughly a week earlier than normal.
“It was over 100 hours of really good snowmaking temperatures,” said venue manager Cody Oates, adding they had their 24 snowmaking guns going nearly 24 hours a day for nearly a week late last month. “It’s always risky to make snow in October, but this year, with those six days of cold temperatures, and with cooperation with Aspen Skiing Co., we were able to put over 10 million gallons of snow on the hill, which has allowed us to have all of our groups using the hill right now.”

According to Oates, the only race-ready training venues currently open in the state are at Copper Mountain, where many members of the U.S. Ski Team are training, Loveland Ski Area and at Aspen Highlands. And not only is the Stapleton Training Center equipped with slalom and giant slalom courses, but there are moguls for freestyle skiers, as well as rails, jumps and air bags for freeskiers and snowboarders.

“Obviously I could go elsewhere. I’ve been elsewhere. And this is just as good as Copper right now, but better because it’s just us up here. It’s pretty relaxed,” said Crested Butte ski racer Tanner Perkins, an FIS-level athlete who trains with AVSC. “We are able to do drills all the way across the whole hill, opposed to having one little lane with one course. We can get a lot more accomplished.”

This past weekend it was mostly just the AVSC skiers taking to Golden Horn. By the end of this month, it also could be hosting some of the best skiers in the world. As they’ve done every year since the venue opened, the Norwegian national team is expected to make a stop in Aspen for training ahead of the Dec. 6 to 8 World Cup races at Beaver Creek. Led by two-time Olympic medalist Henrik Kristoffersen, the Norwegians have been considered the best in the world in recent years.

“It’s kind of been their home away from home for the last six years and they love it. They come back any opportunity they can,” Oates said. “It’s not like Copper or Loveland where there is a ton of different teams renting out lane space and you’ve got Henrik Kristoffersen with his No. 1 competitor looking over his shoulder seeing what he’s doing. It’s pretty secluded here.”

The seclusion has become a big draw for a lot of high-level skiers and snowboarders. As well as the Norwegians, the Swiss men’s national team is expected to make a visit soon, as are the Chinese national freestyle team and a handful of university teams.
“The most special part about it is it’s kind of quiet. We are not looking to maximize the lane rentals at all,” Oates said. “They like coming here because they are kind of left alone, there is plenty of space. It’s not super, super high stress.”

The venue isn’t only for training, either. Aspen Highlands will host FIS races Dec. 9 to 13 for men and women, and will host the U.S. Alpine Tech Championships March 28 to 31, a first for Aspen in 60 years, an event AVSC is helping run alongside Aspen Skiing Co.
In the meantime, the local club athletes have the hill to themselves thanks to that October cold spell.

“We are lucky enough to be training at home. It’s great to just be here,” said Torey Greenwood, AVSC’s head men’s FIS coach. “It’s beautiful. It’s hard, good race conditions, I would say. It’s safe, because it’s just AVSC athletes so you don’t have to worry about the public and that stuff. But conditions are great and training is sweet.”