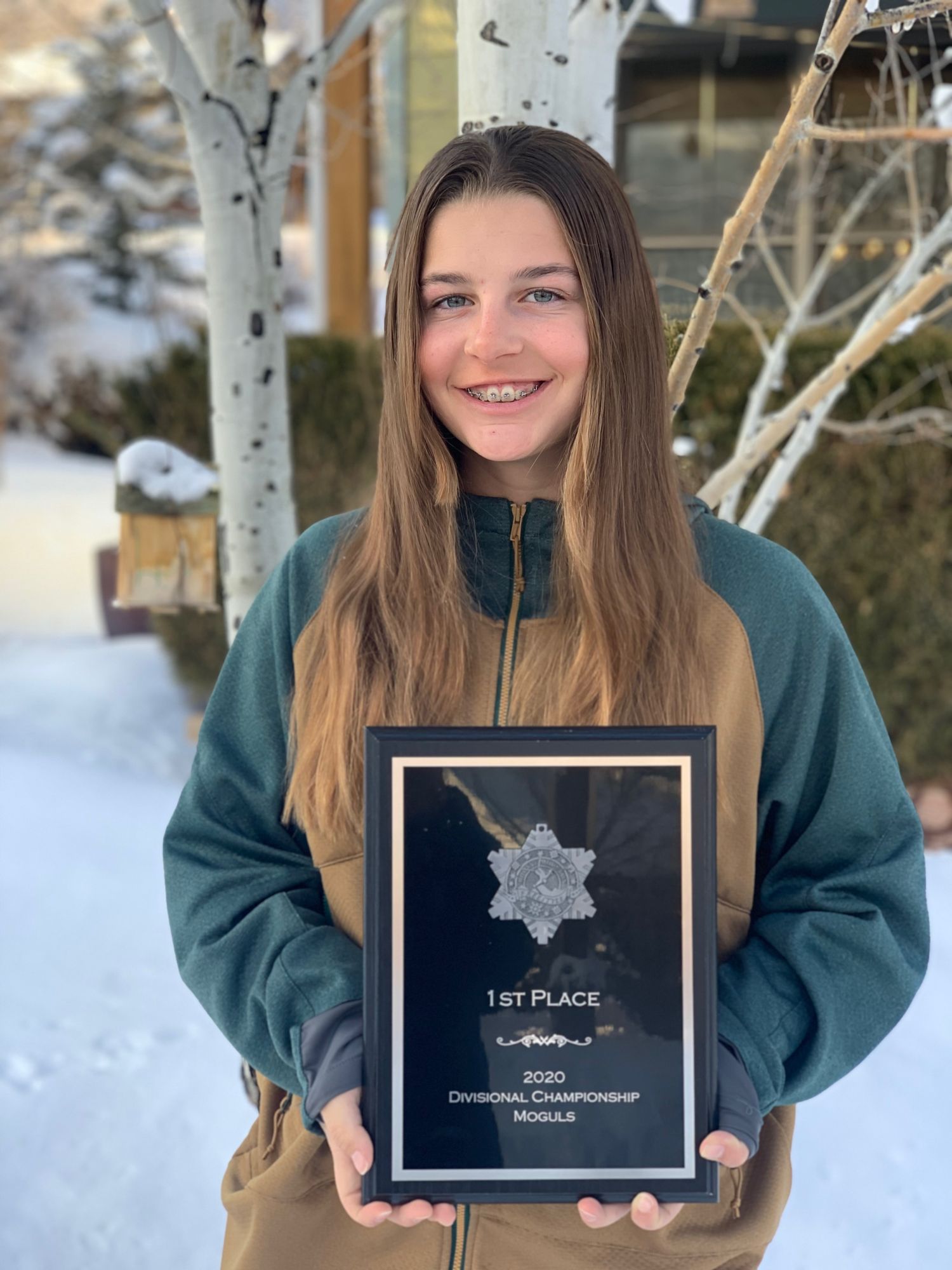 This was originally published in the Aspen Times by Austin Colbert.

Even with immense talent, an athlete needs to have goals and the drive to go after them. For a coach, this can be the most difficult trait to teach. However, in regard to Reese Chapdelaine, Colby Lee hasn’t needed to give that lesson.

“She definitely has been having fun. Along with that, she does show up on the hill every day and she has a list of things she wants to accomplish,” Lee said. “She is always willing to talk about moguls skiing and break down the drills. Of course, the Olympics is the ultimate goal and she has high sights for her career, but she absolutely does break all those big goals into these smaller goals and she’s got a lot on her list she looks at.”

Lee is the head moguls coach through the Aspen Valley Ski and Snowboard Club and Chapdelaine is one of the club’s rising stars. A resident of Snowmass Village, the 14-year-old Chapdelaine recently closed out a strong season in which she held her own against girls with much more experience.

The highlights included her first win at this higher competitive level and a near podium at junior nationals.

“When you go to the FIS-level events and stuff like that, it’s definitely a bit more nerve-wracking,” Chapdelaine said. “So I was a little bit nervous for all of those. But after a couple it got easier and I just kind of focused on having fun and it actually worked out pretty well for me.”

Chapdelaine emerged last winter when she was one of two 13-year-olds to compete at U.S. nationals, which is normally a 14-and-up event. She finished 32nd in the moguls competition at Waterville Valley Resort in New Hampshire, where Lee said “she was pretty happy to just complete a run and get down and ski well.”

She’s been a mainstay in the Rocky Mountain Freestyle competitions this season. Strong on the bumps, Chapdelaine has a solid backflip in her arsenal of tricks and hasn’t flinched when going up against the older girls.

Her first significant win came on Feb. 29, when she won the division championship at Copper Mountain by a solid margin.
“I kind of went into it like, ‘I’m going to try my best. I think I can win this competition.’ And I laid down a really good run. It was really exciting,” Chapdelaine said. “I’ve always had really high goals. I think this is just another step toward those goals.”

The 2019-20 season wrapped up with the Freestyle Junior National Championships at Winter Park Resort. In the March 14 moguls competition, Chapdelaine finished fourth, one off a podium spot. She was top in her age group.

Chapdelaine had planned on returning to U.S. nationals this past week, but the March 19 to 22 event at Squaw Valley in California was among the many competitions canceled amid the COVID-19 outbreak.

“It’s been really cool for me as a coach to see,” Lee said of Chapdelaine’s rise. “She is pretty young for the level she is at, but competitive wise, two years in a row she is hanging with everybody in the division and everybody in the country.”

Chapdelaine began her AVSC career as a ski racer, but both she and Lee credit the club’s freestyle developmental head coach, Amy Mishkin, for leading her toward moguls. As devo athletes, the young skiers are encouraged to try all disciplines before deciding on a singular interest later on.

Once Chapdelaine discovered moguls skiing, she never looked back, and she isn’t the only one. Lee said the club’s competitive moguls team is back up to about 10 athletes, with the eldest being Lee’s 21-year-old younger brother, Aaron Lee. Chapdelaine is one of the youngest but certainly one of the better up-and-comers in the club, regardless of discipline.

And it’s her ability to hone in on the smaller goals that could one day lead to her achieving her bigger goals, like competing at the Olympics.

“This year was even a pretty big and quick jump from last year,” Colby Lee said. “She is progressing really quick and it’s really cool to see how hungry she is. She comes to every training … she is in for every competition. As serious as she is about it, she’s always up there laughing and having a good time and clearly loves it.”