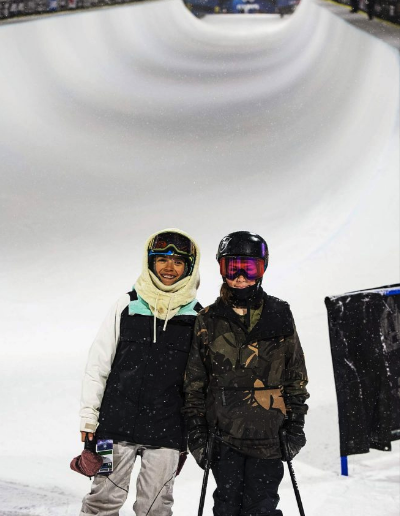 Tabatha Galicia is afraid to fall. It’s probably something the 14-year-old snowboarder from New Castle isn’t overly accustomed to, but considering the stage, it’s a valid fear. After all, it is X Games.

“It’s kind of stressful, because if you fall you know everyone is watching,” Galicia said before training Tuesday at Buttermilk. “I saw some fall yesterday. I’m still stressed out a little bit.”

She’s also incredibly excited for the opportunity. Galicia is one of the few forerunners at X Games Aspen this week, meaning she gets the opportunity to train with the women’s halfpipe snowboarding competitors when they do.

The Aspen Valley Ski and Snowboard Club athlete also will be the first to drop into the pipe before Saturday’s finals as part of her forerunning duties.

“She is helping get the crowd stoked. She makes sure the cameramen and camerawomen know what they are doing and gets all the competitors super amped on her awesome snowboarding,” said Josh Ganz, Galicia’s AVSC coach. “She absolutely loves the halfpipe — that’s one of her favorite disciplines in snowboarding and she works really hard at it.”

There are a handful of young skiers and snowboarders at X Games this week who get to slip the courses — an effort to remove any of the small bumps and ruts that may impede the competitors — but only a small few get to be forerunners. Along with Galicia, 11-year-old Aspen freeskier Hunter Maytin will get to be a forerunner for the men’s halfpipe skiing competition, which includes local star and reigning X Games Aspen gold medalist Alex Ferreira.

“I’m a little nervous,” Maytin said. “It was great hanging out with everybody, getting to meet a bunch of new people.”
AVSC handpicked Maytin and Galicia for the honors this week as they demonstrated certain attributes, such as a passion for the sport, that it felt made them deserving of the role.

“With AVSC, we decide our forerunners based on age, ability and, even more importantly, if they demonstrate our core values: teamwork, integrity and commitment,” Ganz said, saying Galicia showed just that. “She is always trying to help out her teammates and stoke them up and offer suggestions when she can.”

Being a forerunner is a great opportunity for the young athletes. On top of it all, the extra practice sessions under the lights are a chance for them to experience all the glory of something like X Games.

“It’s extra training time, hanging out with the big guys and seeing how they approach it,” said Maytin’s AVSC coach, Greg Ruppel. “He is here to psyche up the crowd. Sometimes at the World Cup they use forerunners to kind of set a baseline, but here it’s just more to give a young kid an opportunity to come out and ski this venue and stoke up the crowd before the main guys get up there.”