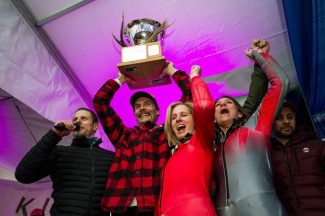 This article was originally published by Austin Colbert in the Aspen Times. Photo by Anna Stonehouse / Aspen Times.

Amid the Olympians, celebrities and general party mayhem, former World Cup ski racer and Aspen Valley Ski and Snowboard Club coach Casey Puckett made sure everyone was reminded of why they were there.

Puckett pulled out a letter written by an unnamed AVSC athlete about how much getting up on the hill meant to the child, whose parents are getting divorced. Without the funding brought in from events like Saturday's Audi Ajax Cup, that child might never have the opportunity to make turns and put those worries aside.

"I spent my life in skiing and ski racing and there is nothing more rewarding than creating opportunities for others in the future," said big mountain ski icon Chris Davenport, who co-chairs the Ajax Cup with Puckett. "I'm so proud of the Aspen Valley Ski Club for their commitment to offsetting the cost of the sport, because it's expensive. It's one of our most important missions — making skiing and snowboarding affordable to everybody so no kid is left out of the club."

The Ajax Cup, held for the eighth time on Saturday, is the AVSC's largest fundraiser. Last year it brought in about a half million dollars for the club, and Executive Director Mark Godomsky expected this year's number to wind up in the same range, if not more.

"We are not done yet, but I think this will be our most successful Ajax Cup, ever," Godomsky said. "It's really neat to watch a community rally around an organization and raise money to give kids an opportunity."

The AVSC once stuck with a traditional gala dinner to raise its money, but that just didn't feel right. So eight years ago the idea of instead doing ski races was born. The Ajax Cup is a 16-team, parallel giant slalom and has no shortage of elite talent. Each of the 16 teams has its own "pro" skier, and this year's featured guest was none other than Olympic gold medalist and two-time overall World Cup champion Bode Miller, arguably the greatest male alpine skier in U.S. history.

Miller's participation was planned, as was NASCAR driver Jimmie Johnson's, a part-time Aspen resident who has now competed in three Ajax Cups. However, many surprises were had, such as fellow NASCAR icon Dale Earnhardt Jr. tagging along with Johnson and donating a day on the track with the duo as an auction item, and Aspen's Wiley Maple making it in time to take Davenport's spot as one of the pros.

Maple, who is currently competed on the World Cup circuit and took 24th in a downhill in Bormio, Italy, on Thursday, spent Friday night at Denver International Airport after missing his flight home, hopped on the 7 a.m. flight Saturday morning and essentially came straight to the race course at the base of Aspen Mountain to take part in the festivities.

"He was amazing," Davenport said of Maple. "That's the kind of dedication that when you grow up in AVSC, you are part of a bigger, extended family of athletes. It was an amazing day. I'm still kind of spinning from it."

Team Super-G! won the Gorsuch Cup — awarded to the last team standing at the Ajax Cup — edging team M.A.G.S. in the final. An acronym for "Middle Aged Guys on Skis," team M.A.G.S. included Johnson, who made his first finals appearance.

Jonas Nyberg was the pro for team Super-G!. Nyberg, who grew up in Sweden, is in his first season as a FIS coach with the AVSC.

"Nyberg, in his first year at AVSC, won the time trials, he won the $500 lottery and his team took it to the end," Godomsky said. "It's awesome. It shows the quality of staff we have at the AVSC."

Among the last-second auction items was a half-day ski day with Vail's Lindsey Vonn, the four-time overall World Cup champion who is largely considered to be the greatest female ski racer of all time. Vonn, who didn't make it in time for Saturday's races, will be in Aspen for a few days training ahead of February's Winter Olympics in South Korea.