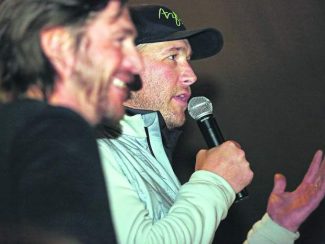 
Even at 24 and a former member of the U.S. Ski Team, Aspen's Katie Ryan still gets excited knowing she could get to race one of her idols, Kristina Koznick, a three-time Olympian and former World Cup competitor — and last year’s winning pro at the Ajax Cup.

That said, even Ryan can't begin to imagine what it would be like to again be a teenager and get the chance to ski alongside Bode Miller.

"The fact that I get to race against (Koznick) is for my 24-year-old self amazing, so I can only imagine what it is like for the 12-year-olds," Ryan said. "It's so nice that (Miller) continuously gives back to the ski racing community. He realizes this is an amazing club and people are really genuine and the love of skiing will always be around for us."

For many this weekend, those dreams will become reality. Miller, considered to be the greatest American male alpine ski racer in history, is the featured professional for the eighth annual Audi Ajax Cup, the largest fundraiser of the year for the Aspen Valley Ski and Snowboard Club. Saturday's modified dual giant slalom will feature 16 teams going head to head on the course built on the Little Nell trail at the base of Aspen Mountain.

The festivities got underway Wednesday at Casa Tua in Aspen, where team "Kids First!" paid $70,000 — split equally between the AVSC and Miller's own Turtle Ridge Foundation — to purchase Miller as its pro for Saturday's competition.

"We've never auctioned off a pro. We always just randomly picked pros out of a hat for each team," Casey Puckett said. "But since we had Bode, we thought it would be a great opportunity for the club and also for Bode's foundation to auction him off to the highest bidder."

Puckett, who co-chairs the Ajax Cup alongside big mountain ski icon Chris Davenport, is a former World Cup ski racer who spent six years as one of Miller's teammates on the U.S. national team. He was among the people who had an influence in getting Miller to Aspen for the weekend.

"I've always had a connection to Aspen and normally this part of the season is when I was skiing, so it was never even an option," Miller told The Aspen Times on Wednesday. "But I always knew about it. So this year finally the schedule was open and we were able to do it. So we made it happen."

Miller is an Olympic gold medalist and two-time overall World Cup champion. Now officially retired, he will be a commentator for NBC Sports during the 2018 Winter Olympics in South Korea. Among his other endeavors, Miller is an equity partner and the chief innovation officer for the Aspen-based clothing company, Aztech Mountain.

"I had no money growing up and needed donations and people's support to make my ski career develop," Miller said of the need for events like the Ajax Cup. "It's an amazing ski culture here, so to have people taking care and supporting the next generation and making sure people have the opportunity to be involved is an admirable project and I'm happy to go race around a little bit and hit some gates."

Each of the 16 teams competing Saturday has a pro to lead the way. Miller, Puckett, Davenport, Koznick and Ryan are all among those pros. The remainder of the rosters will include anyone from current AVSC athletes to seven-time NASCAR champion Jimmie Johnson, a part-time Aspen resident and Ajax Cup veteran.

The teams are divided into four, four-team pods, with one team per pod advancing to the head-to-head semifinals.

The racers are required to set a handicap on Friday — held from noon to 2 p.m. — which will help equalize the playing field come Saturday. Racing is scheduled to begin at 9 a.m. on Saturday and end by 3 p.m. Spectating is free along the course.

"This is my favorite event of the holiday season, for sure," Ryan said. "Selfishly, it's one of my favorite times of the year because I get to race. I get to put the suit back on. I get to go haul ass."