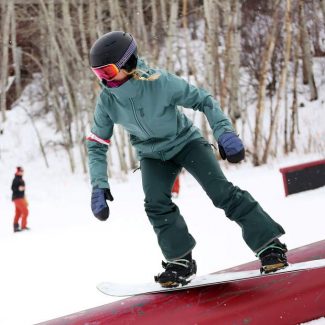 Once upon a time, Jordie Karlinski was a slopestyle snowboarder with the U.S. national team. She came within a run of making the 2014 Winter Olympics, but after that failure decided to walk away from the only life she had really known.

Now 29, the Aspen native finds herself being pulled back into that world, but in a slightly different way.

"It seems I'm being called into this path," Karlinski recently said. "The stars kind of aligned. I reached out to Nichole and Jason last spring. I really felt a call to get back in the competitive snowboard world."

Working under snowboard program director Jason Cook, Karlinski joined the Aspen Valley Ski and Snowboard Club — a club she grew up riding for — as its high-level Team 2 snowboard coach this winter. She replaced Nichole Mason, who left the AVSC after five years to become the national rookie team coach with U.S. Ski and Snowboard.

Karlinski briefly coached developmental athletes after her "retirement" four years ago, but it was short-lived as she wasn't in a good position to give back like she wanted. A lot has changed since then.

"I don't think I was mentally prepared to coach," Karlinski said. "I still had to do a lot of personal work to get over my whole career and obviously not making the Olympics. I'm now in a better state and am really excited and feel I have the energy to give back."

Last year, Karlinski created a "mindful performance" business, catered in large part toward athletes. She plans to take many of those same mental practices into her coaching, something she wishes she had when she was competing.

"Nothing against my coaches, but I didn't have mental coaching until I was on the highest level with the U.S. team," Karlinski said. "Now it's being discussed as a thing that is necessary to compete at the top level, and that's part of what I want to give to these athletes."

Karlinski understands she is stepping into big shoes, as Mason was named the USSA Snowboarding Domestic Coach of the Year as well as the Development Coach of the Yearonly a couple winters ago. She admits she still has plenty to learn as a coach, but Karlinski is certainly on board with getting more girls into the sport, something Mason also was passionate about.

"Coming back into it now, I see there are not that many female snowboarders, on the young end and on the older end," Karlinski said. "I kind of have this vision of doing this really cool girls clinic at the end of the season and trying to keep the stoke of snowboarding alive and keep girls in snowboarding from a young age and hopefully keeping them through to competitive athletes, if they want."