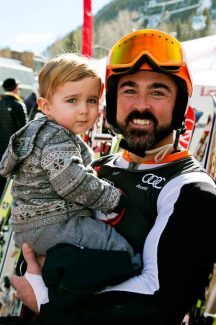 It's Dec. 30, 2017, in Aspen. It's one of the busiest ski days of the year and Aspen's flagship mountain is hosting a head-to-head ski race to benefit a local nonprofit.

Five guys stroll up to the bottom of Aspen Mountain in star-spangled jumpsuits, skis on their shoulders and smiles on their faces. They look up at the ski hill to assess the dual giant slalom course that will be the day's battleground. One of the five patriots is none other than two-time Daytona 500 winner Jimmie Johnson, one of only three people to ever win seven NASCAR championships. But he's not at Daytona. Today he'll have to turn left and right.

"MAGs" (Middle Aged Guys), the name the team has chosen for themselves, enters the racer's tent to settle in and get a pre-race breakfast. To their right is Bode Miller, the most successful American male ski racer in history. Bode sits stoically, sipping a cup of coffee while mentally preparing for the ensuing competition. To their left, a group of local kids goof around, as kids are apt to do, sneaking not-so-subtle peeks at the ski racing legend.

They may be a little nervous and very star struck, but they can't wait to get up on the hill. The racer's tent holds a truly eclectic group that includes local bartenders, real estate agents, and middle and high school athletes, as well as New York hedge fund managers, Los Angeles developers and retired professional ski racers.

The best part? It's anyone's race.

After a day of heated rivalries, close calls, battered bodies and bruised egos, MAGs finish in second, the local children giving them a run for their money. The winning team, "Super G," celebrates in the finish corral. They were led by Jonas Nyberg, a decorated collegiate skier from Norway, in town for the season to help those local kids perfect their technique. Everyone retires to the après party to enjoy some local fare, congratulate each other and reminisce about the day's races.

After the live auction, the DJ turns up the volume and the dance floor fills with racers, families and friends. Regardless of the race results, everybody is happy because winning took on a different meaning. Winning is about supporting our kids.

The scene above was from the 2017 Audi Ajax Cup, benefitting the Aspen Valley Ski and Snowboard Club. For those unfamiliar, AVSC is a local nonprofit with the mission to provide all youth in the greater Roaring Fork Valley the opportunity to excel as athletes and as people through winter sports. The club provides subsidized programming and scholarships to more than 2,300 children annually in the valley, without which many of whom would never be able to afford the opportunity to participate in winter sports. This is tantamount to telling a child who lives by the ocean that he can't go swimming because his family can't afford it.
The Audi Ajax Cup is our single largest fundraising event of the year and, along with our other fundraising efforts, allows AVSC to offer some of the most affordable programming in Colorado. Last year marked the eighth Audi Ajax Cup; we had our most successful year on record, bringing in more than $600,000.

But it is more than a fundraiser. Yes, our goal is to keep breaking our fundraising records, but that is only half the story. The Ajax Cup is a showcase of what makes our winter sports community so amazing. It brings together facets of our community that might not otherwise interact. It is inclusive, encourages determination, espouses sportsmanship and promotes a sense of camaraderie that lasts long after the event is finished. It gives us the opportunity to experience a taste of what we're working so hard to provide to our local youth: challenge, fun, teamwork, community and competition.